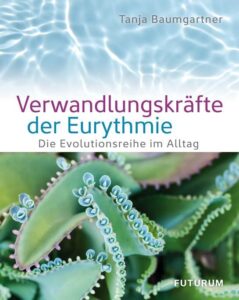 Every person is on the move – internally and externally. Twelve basic principles, which unconsciously determine our daily movements and habits, were shown in their archetypal meaning with the “Evolutionary Row” developed by Rudolf Steiner. In each of its twelve sounds, three qualities of movement interact with each other, and they appear in a eurythmic gesture on the human body.
In detailed individual presentations and with many pictorial examples, individual approaches are opened up that allow these sound qualities to be experienced. Each sound becomes the basis for the following one and thus part of a developmental series that corresponds to inner processes in human beings and in nature. Thus, from the creative powers of eurythmy, an instrument of concrete help in life is developed, with which it can be possible to break habits in personal and social development processes, to overcome obstacles and to achieve a new orientation in everyday life and work.

How to order: unternehmen eurythmie, Futurum-Verlag and in your bookstore

Dear Tanja,
Yesterday I found your book in the bookstore and bought it immediately. I think about the evolutionary row again and again, but unfortunately I have never encountered it in eurythmy therapy until now.
Such an aesthetically pleasing book, which filled me just flipping through it! I would love to just flip through it. At the same time came the desire to have already read the beautiful lines and only then came the anticipation of reading itself. The pictures of Barbara are great and fitting to the book.
The evolutionary row comes just in time for me. I had a nervous breakdown last Wednesday and thanks to your book (in the meantime I have already read it all the way through!) it helps me to look for where I stand and why and where such things lead. It gives me the strength to think objectively and not be distracted by feelings, experiences and details. It gives a kind of basic trust that it is good as it is, that the phase is important, that it is – just, a phase – and will dissolve into a next part of evolution.
I definitely recommend your book. Thanks to the symbols also to people who do not know anthroposophy.
E.H.

Review from the Wochenschrift “Das Goetheanum” 42/2020:

In each action a new evolution begins

The movements inherent in the forms of blossom and bud are those of the living in general. They can be found in breathing, they work in every eurythmic sound and thus they form the great context of the evolutionary row – a series of twelve creative principles in twelve consonants – which is the subject of this book by Tanja Baumgartner.

In the first part of the book we breathe in – each sound of the evolutionary row is described in many colors and aspects, after an image has been created at all, how a sound can be grasped in its quality of movement. One dives into different layers of the sound, starting from the drawn figure with its three colors, through an image from the history of art, the world of plants and an example from everyday life, from life in general. There is also a ‘signet’ for each sound in its quality of movement, which abstracts this quality so that it can be understood by each and everyone. This practical application runs like a thread through the book, everything should become accessible for the ‘normal’ person; it is about tangible principles of life. This then leads to the second part of the book, in which we exhale into the world. One can experience here how the evolutionary row can be found again in all areas of life and how now the human being, whose evolution can be experienced in this row – Rudolf Steiner’s few indications of this consonant row point to this – himself becomes and can become the creator and shaper of developments and evolutions in the realm of the living of all areas of life! Baumgartner shares here the richness from her many years of work with this series. Several other people also have their say, describing their experiences with the use of this special consonant sequence and also the fruits of their collaboration with the author. Here one gets to know the series in baking, in seed breeding, in massage, in the treatment of plants, in management consulting, and also as an effective force in biography and as an impulse for painting. The latter has also enriched the book, in which a very coherent picture has been created for each sound. While in the first part of the book one sound after the other has appeared, absorbing and transforming the space of the previous one, in the second part one can now encounter the world through this phonetic ocular. One’s own imagination is stimulated and the desire to create is aroused! The foreword by Wolfgang Gutberlet stands like a star above it, speaking of the sounds as spiritual forces from the stellar space. May the book become an inspiration for many people to illuminate the world with the cosmic forces of eurythmy, to solarize it, so that we experience ourselves again as part of creation and in every action a new evolution can begin.

Link to the original article 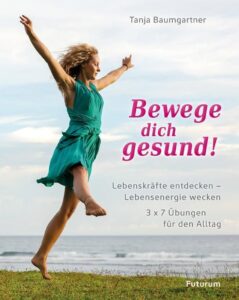 “… Such an aesthetic book, which filled me just by leafing through it! … There is a kind of fundamental confidence …” E.H. 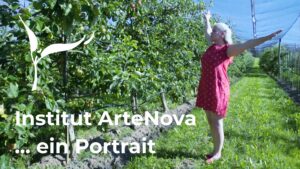